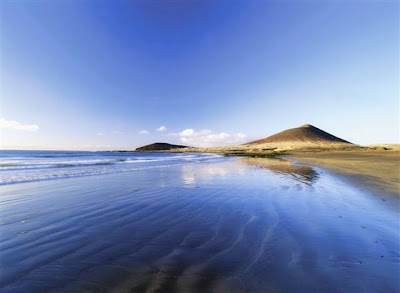 My personal objection to the building of a second port in Tenerife (on the coast in the municipality of Granadilla) is that it it can only be seen as ‘necessary’ by those who imagine that a second port for Tenerife will ‘open up the island to more business with African nations etc.’ and ‘provide employment during construction and after for Tinerfeños’. The first earnest dream might well be true, the second might need to be proved.
When the mayor and council of Granadilla mooted the idea of building a megaport on the coast just one kilometre from the popular seaside resort of El Médano, the first two meaningful complains came, of all things, from two retired Directors of the Port of Santa Cruz de Tenerife. One assumes these two professionals know what they are talking about. Both said, in different documents addressed to the Canary Island Government, the Cabildo, and Brussels, that the port at Santa Cruz already runs at HALF its capacity. Certain improvements could and should be made, and ‘trade with African nations’ can be carried on just as well in Santa Cruz as at Granadilla.
The problem is, as it always is, that there are ‘private commercial interests’ involved in the building of an extra port at Granadilla. If the port is built, certain persons and corporations will be much enriched. Good for them. But what about the environmental effect on El Médano? Fishermens’ associations have promised that, stemming from their undoubted experience of the coast, a huge muelle built out into the Atlantic at that point will produce disastrous consequences for the beaches at El Médano, up to the Montaña Roja, and well beyond. The sands will shift, and disappear, because of new currents and tides. Fishing will vanish because of pollution of the ocean by shipping.
But my biggest objection remains the same: why build such a port where there is absolutely no actual need for it? If experts say this, I tend to side with the experts. Brussels and the European Union, by the way, can be counted out. Various committees have been positive on the idea, then negative, then positive again, and finally negative. A report exists which states categorically that a new port at Granadilla is not necessary. Another report says that it is.
The present worldwide recession will prevent the proposal from taking shape for a year or two more. Tenerife and the Canary Islands cannot dig into its almost empty pockets for the tens of millions of euros necessary. The cash will have to come from the EU – and just at the moment it won’t. This is not to say that the dilemma of the new port at Granadilla will go away. It will linger for decades. I beg bloggers to keep one thought in mind: there are two sides to every argument; those against the idea of the port are not just blind old conservationists. They are citizens who have just as much right to their opinion as those who back the proposal. And they are led by none less than TWO professional directors of port authorities, both of whom deny any need whatsoever for a new port at Granadilla.

1 comment for “The Port at Granadilla; an alternative view”