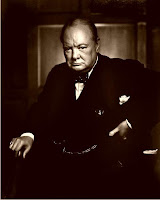 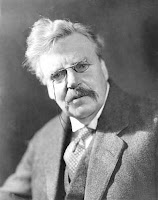 G.K. Chesterton was an internationally famous historian, journalist, novelist and wit. At the peak of his powers around 1906, his novels about the Catholic priest/private detective Father Brown sold in thousands. He was an enormously fat man, given to sitting in his London club by himself, and not encouraging any other member to approach.
Nevertheless one young member dared to take a comfortable chair beside the great writer. This was the irrepressible Winston Churchill, raconteur, war correspondent, MP, and future manager of the British war effort in World War II. Winston took his seat and observed Mr Chesterton closely. His subject returned the gaze, and took up his brandy glass.
Winston said suddenly, “’G.K.’, I do believe you are pregnant!” Chesterton looked downwards at his vast paunch, and replied reflectively: “You are probably right.”
Determined to continue the joke, Winston asked, “and what shall you call it, the baby I mean?” Again Chesterton stared at Churchill with an inscrutable expression. There was a pause, and then he said: “If it is a boy I shall call it Gerald; if a girl, I shall call it Katharine, after Katharine Parr, who I admire; and if it is all piss and wind, as I suspect, I shall call it Winston.”

2 comments for “Chesterton and Churchill”