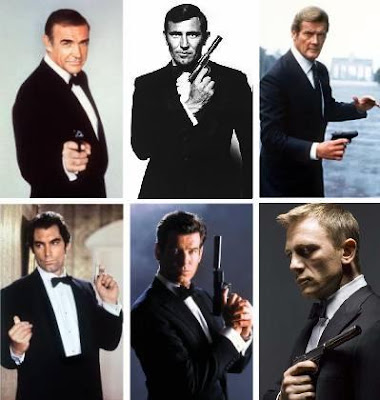 Cinema is history too, and hace muchos días two pushy American film producers called Harry Saltzman and Cubby Broccoli persuaded author Ian Fleming to sell them the rights to the titles of his highly successful James Bond thrillers. They couldn’t make their movies directly from the original stories, but they could use all names of characters. The films would be made in England, not Hollywood.
Fleming’s James Bond is in his late thirties, suave, Old Etonian, Scottish ancestry of the very upper class, more dangerous than a crocodile but better looking. How were Saltzman and Broccoli to cast Bond for their first film? From a very long list of possibles (including some names that would put you in shock) they chose a plasterer’s mate from Edinburgh, parttime amateur boxer, competitor in the Mr Universe nonsense, called Sean Connery. He made the first film, and quite a lot of succeeding Bond films, with enormous success – but Connery was never Fleming’s Bond, though the author golfed with the star, and they liked each other. The second Bond, From Russia with Love, was darker, more realistic. Connery had to work with Robert Shaw, a notorious scene-stealer and perfectionist, also competitive and not really very nice. But this film is the only one in the entire series that is in effect a ‘film of the novel’.
Then Connery decided he had had enough of Aston Martins and quickies with beautiful girls, and went off to make serious movies. He was replaced by Roger Moore, older than Connery, who decided to play the Bond part for laughs, aided by some of the best visual jokes ever made in Anglo/American movies. No-one will forget the ski-ing and parachute incident in the opening credits of The Spy who Loved Me, with the Union Jack colours on the ’chute. When asked by a reporter how he approached the difficult bits of acting James Bond, Moore said, “first, raise the right eyebrow, then the left . . .” which gives the blogspotter an idea of what he thought of the rôle that brought him millions.
Production difficulties produced a bizarre third Bond in the Australian model George Lazenby, who had not trained as an actor. He wasn’t bad, after all, and took daily lessons in acting from his wonderful co-star, Diana Rigg, who has forgotten more about real acting than you could ever learn. Lazenby was good in the fight scenes, and lamentable in everything else.
And then at last there was Timothy Dalton. This actor might have been designed for Bond. He was everything that Iam Fleming wrote about in his Bond novels, including the Old Etonian bit. He was the total opposite of Connery, and would have continued were it not for the fact that he had no intention of becoming type-cast. Being type-cast (as a previous Bond) ruined Moore’s career, and Dalton wasn’t having any. He made two Bonds, two of the very best, and retired from OO7.
Pierce Brosnan was worse than Roger Moore, though much younger. He was never convincing, and seemed to treat the whole thing (which made him a millionaire many times over) as a cheap joke. Ian Fleming had luckily been dead for years when Brosnan started his series of comic caricatures, but the special effects helped him until he too gave up, thank God.
And then came Daniel Craig; terrific and convincing in the tougher, nastier bits. Hopeless as a gentleman, because his looks and his plebian accent do not meld with James Bond. His second stab at the part, in the strangely named version of an original Fleming short story called Quantum of Solace, is good as far as he is concerned – but the film is quite awful, pointless, theme-less except for revenge: a disaster which some US critics have described as ‘obviously the last of the Bond series’.
Conclusion: The only celluloid Bond who was the nearest to Ian Fleming’s invention was Dalton – who refused to do any more than two films. Connery is still the most popular, but then Connery had a tremendous success playing an Arab robber-sheik with a broad Scottish accent, and equal success playing an Irish Chicago cop with a broad Scottish accent, and a Kipling cockney rascal with a broad Scottish accent. And he’s a first class golfer too. He even played a repeat Bond ten years after he left the series, when he was well over fifty. He is by far the most popular Bond – but how many of the millions who go to Bond films have actually read an Ian Fleming Bond novel?